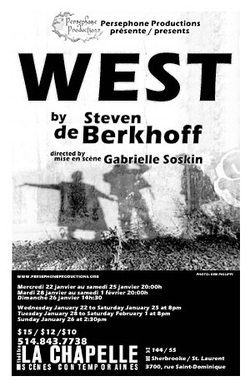 
West is a powerful passionate play about gang warfare on the streets of London. West is about courage, the courage of a young man who is not afraid to fight the bully. Written in Blank Verse, Berkhoff combines a parody of Shakespeare's heightened text with a stark explosive language and biting humour of the street. The play is a rich combination of verbal fireworks and movement and a bare stage the characters create their own time and space.