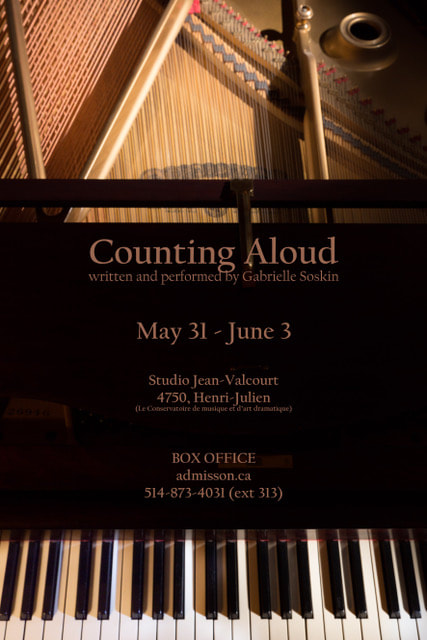 Written and Performed by Gabrielle Soskin
Directed by Christopher Moore

Gabrielle Soskin , founder of Persephone Productions , returned to the
stage in the world premiere of Counting Aloud , a one-woman show she wrote, inspired by her
determination to learn to play the piano later in life. Played in Montreal in May 2018 at the Conservatoire    de la Musique,  it played  November 16 and 17 at the Arts Court
Theatre, Ottawa.

Counting Aloud portrays not only the frustrations of learning a new and very technical
skill, but also the trials Gabrielle faced in her personal life. After highly successful runs in Montreal
and Gananoque, Gabrielle brings her show to Ottawa.

Our doubts are traitors and make us lose the good we oft might win by fearing to attempt.
- William Shakespeare

Interweaving some of Shakespeare’s reflections on life, Counting Aloud is the story of a passionate
‘woman of a certain age’ who takes up the piano for the first time with dreams of playing like a
concert pianist. No stranger to dedication and discipline, having studied ballet, theatre, and yoga,
Gabrielle’s innate determination and lifelong study habits serve her well in her quest to conquer the
piano, but coming to terms with her own limitations is the unexpected and difficult pill to swallow.
Her touching musical journey, a metaphor for the lessons we all must face in life and love, is
sprinkled liberally with humour for an entertaining and moving theatrical experience that every
audience member will relate to through at least one aspect of their life.

“If you can look to the seeds of time and say which grains will grow
and which will not … speak.”
- William Shakespeare

In an interesting twist, Christopher Moore , the student that Gabrielle once taught and directed at
John Abbott College, now directs her in this production. The entire design and backstage team are
also John Abbott graduates: Kevin Conforti (lighting and sound design); Kelly O’Toole (costume
and set design); and Jasmine Moore as the Stage Manager.