The Undiscovered Country
Director Christopher Moore mixes Shakespeare and music in
Persephone Productions' To Be
By Neil Boyce, The Montreal Mirror, April 26, 2012 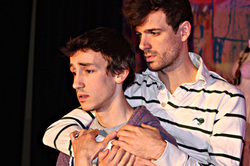 FINDING LOVE IN DA CLUB:
Trevor Barrette and Chris Hayes in To Be

Having collaborated with Persephone Productions for a while now, as both actor and co-director, Christopher Moore finds himself sitting solo in the director's chair for their upcoming production, To Be. Artistic director Gabrielle Soskin, who just returned from a trip around the world, hangs back for this one, acting only as production consultant for the final rehearsals. The company and Soskin have long been associated with Shakespeare, and I wondered if Moore feels that "uneasy lies the head that wears a crown"? "It's both very freeing and a little lonely," he says, "because I've always worked with her. It's something Gabrielle mentioned once and now I realize it. There's no one to bounce ideas off of or keep you in line. It's odd. Not bad-just something I didn't expect."

Following a long tradition of writers who like to mess with the classics (there's a hip hop Shakespeare company operating now in London), the work by John Abbott grad Trevor Barrette is a mash-up of a modern-day Hamlet and a musical. Its central character, Adam, has always dated girls and so is surprised when he goes for a night on the town and quickly falls in love with a dude. He's confronted by the ghosts of his past about the unexpected direction his life has taken.

Barrette (and Shakespeare) wrote the play and contributed to the score by Montreal composers Gabriel Frank and Stephan Bradshaw. Actors from Persephone's recent Far From the Madding Crowd return with a pack of newcomers, some of whom bring with them experience from working in musicals like 42nd Street, Hairspray and Dracula. "Apart from everything, I just think the songs are really good," says Moore, quick to credit the composers, choreographers and musical directors who work alongside him. "There's still a lot of room for interpretation and acting. And it's very different from most plays I've been involved in."

What's also cool about it is that young anglo Montrealers are creating original, locally produced work at a professional level. If you worry sometimes about the future prospects of English theatre in the city, you can't help but be encouraged by companies like Persephone, and directors like Moore.