Christopher attended the John Abbott College Professional Theatre Program where he received The Pamela Montgomery Award upon graduation in 2005. Since then he has worked as an actor in productions that include Max in Martin Sherman's Bent (Altera Vitae), Benjamin in The Graduate (Hudson Village Theatre) and Titus in Shakespeare's Titus Andronicus (MSTC). He has been on several shows with Persephone playing Duff in Whitby's To The Green Fields Beyond (2007 MECCA for Best Ensemble), Iago in Shakespeare's Othello and co-directing the 2010 season's Henry V. He directed To Be for Persephone last spring: he recently played the title role in Persephone's Hamlet and Byam in Oroonoko. 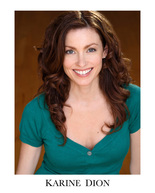 Upon completing the Specialization in Theatre Performance at Concordia University, Karine moved to Toronto where she studied film acting at the Pro Actor's Lab, improvisation at the Second City, and toured shows across North America and the Middle East. Theatre credits include Calphurnia in Julius Caesar, Lady Capulet in Romeo and Juliet, Helena in A Midsummer Night's Dream, Therese Dubuc in Les Belles Soeurs, Carol in Oleanna and most recently Miss Temple, Blanche Ingram and Diana Rivers in Jane Eyre. Film and television credits include Mauvais Karma, Ninety-One, Rock, Paper Scissors-The Way of the Tosser, Home, Bonded Pairs, The Legend of Clipper Dos Santos, Going to Kansas City and upcoming Strangers in the Home. Karine now lives in Montreal with her husband, 9-month-old son, and 4-year-old daughter, working as an actress and leading the Lost and Found team at the SPCA.

Christine McCaffrey has been performing on stage and involved in all technical aspects of theatre, from acting to stage management to directing and producing for nearly 30 years across Canada. She considers herself very fortunate to have had wonderful opportunities to work with and learn from such talented and giving Theatre professionals. Highlights include numerous theatre productions with Calgary's Storybook Theatre, Hudson Village Theatre and Word of Mouth Productions. Most recently she was actor and set designer/builder for a show in this year's Centaur Theatre Children's Series and Assistant Stage Manager for Persephone Productions' Oroonoko.

Peter is a graduate of both the John Abbott College Professional Theatre program and National Theatre School's Lighting Specialization program. In the past he has worked with the Cirque du Soleil, Les Sept Doigts de la Main, and designed for companies like Montreal Theatre Ensemble and the Hudson Village Theatre. Since 2005, he has returned to John Abbott to teach lighting design and technical drawing. He was lighting and set designer for the recent Oroonoko for Persephone.