Juggling Hardy, Bronte and Poe
Director/actor takes on three productions and is loving every
stress-filled minute of his busy schedule
BY PAT DONNELLY, THE GAZETTE OCTOBER 15, 2011 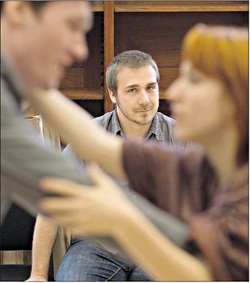 Christopher Moore (centre) co-directs the play Far from the Madding Crowd, one of three productions taking up his time this month on the theatre scene.
Photograph by: PIERRE OBENDRAUF THE GAZETTE, The Gazette

Christopher Moore is a busy guy these days, dividing his time between Thomas Hardy, Charlotte Brontë and Edgar Allan Poe.

Moore is involved, as an actor or a director, with three upcoming stage adaptations of literary classics. This sometimes means three different rehearsals in one day. But he isn't out to prove anything.

"It's absolutely serendipitous," the N.D.G.-raised Moore exclaimed over the phone one evening this week, having completed yet another multiple-rehearsal day. "I had no control over the timing of any of them. They just kind of fell into my lap." This weekend, the worst of Moore's rehearsal marathon is over...

...Moore is working with Persephone again, co-directing an adaptation (by Mark Healy) of Thomas Hardy's Far from the Madding Crowd with the company's artistic director, Gabrielle Soskin. Soskin was a former teacher of Moore's at John Abbott. She has been spending her retirement years creating theatre employment for her former charges and recent graduates from other Montreal schools.

Far from the Madding Crowd will be presented at the Rialto Theatre, then at Victoria Hall in Westmount. Booking a production into two separate venues is a new gambit for this company, but it seems to be panning out well: Several performances are already sold out.

Part of the reason for this two-locale approach, Moore said, was the fact that the Rialto was already booked on Halloween weekend, for the Rocky Horror Show Live...

...While he's enjoying every stressful minute of this three-way split, Moore is not, by any stretch of the imagination, striking it rich.

While Persephone Productions pays a little (not scale), Lakeshore Players, now in its 47th season, is an amateur company that does not offer remuneration to actors.

As for the Poe show, "Well, he paid me last time," Moore said. "I assume he's paying me again." Then, after a thoughtful pause: "Maybe I shouldn't take that for granted."

Reprinted and adapted from The Montreal Gazette October 15, 2011